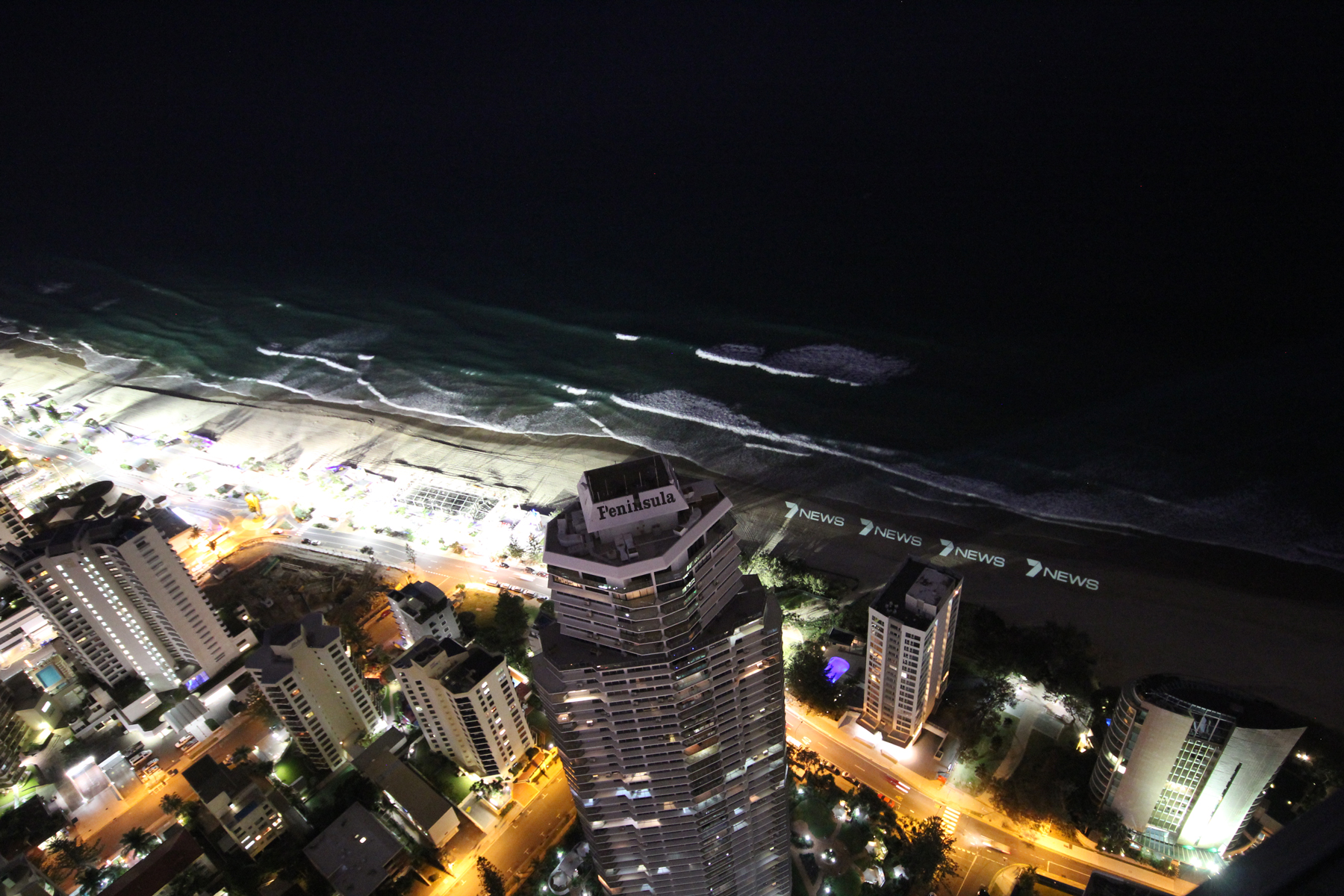 The four 24 metre wide gobo images seared into the sand of the beach at Surfers Paradise right below the 322 metre high Q1 … for the launch of the new 7 Gold Coast News operation.

The ingenious optical stunt was one of a number of high impact logo activations created for the event by lighting designer Adam Volz of TLD Services, who was asked by Channel 7 to sprinkle some visual magic and get their logo out there captivating audiences and involving known local landmarks.

Adam and the client decided on the concept of four logos beamed on the sand – the beach is right at the essence of Gold Coast culture and community – covering an area of approximately 100 metres wide as part of the visual sequence of WOW factors. 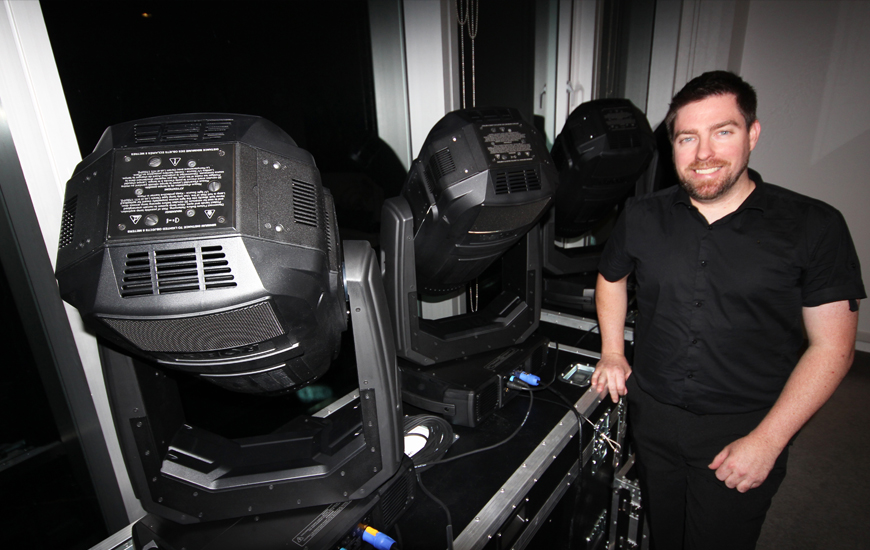 Once they decided to roll with it, Adam’s next task was making it happen!

Collaborating with Pete Coorey from Select Audio-Visual Hire in Brisbane on the project, he knew he needed a seriously bright stadium lighting instrument.

Having used BMFLs for numerous shows in many venues and scenarios, he hoped that for this application, the luminaire would exceed his expectations … and push every single lumen of light out of that intense 1700W output!

The next challenge was to find a location for the four BMFLs. Adam suggested one of Q1’s penthouse apartments just below its famous observation deck … to which the occupants and building managers agreed.

The master bedroom proved to have the optimum line-of-site to the beach and tests the previous night revealed that the target area of beach available below for the logos to be projected spanned over 100 metres right in front of the Q1 … which was perfect.

He needed to ensure that the gobo image hitting the beach wasn’t too big for the space after being projected 300 metres from the penthouse window.

BMFL gobos are normally 30.8 mm in diameter with an image area of around 25mm, but with the throw at the minimum zoom of 5 degrees this would be way too big, so he and the team at Gobotech on the Gold Coast realised that a custom gobo would be required. This gave a print area of 6 mm reducing the overall size of the projection.

The fixtures were programmed and controlled locally in the penthouse by Adam. A full up and down movement from the sand to the water on the beach involved was only around an inch of movement for the BMFL Spot heads, but covered over 60 metres to the water! He programmed a 100% movement speed to ensure this fine movement was absolutely smooth! 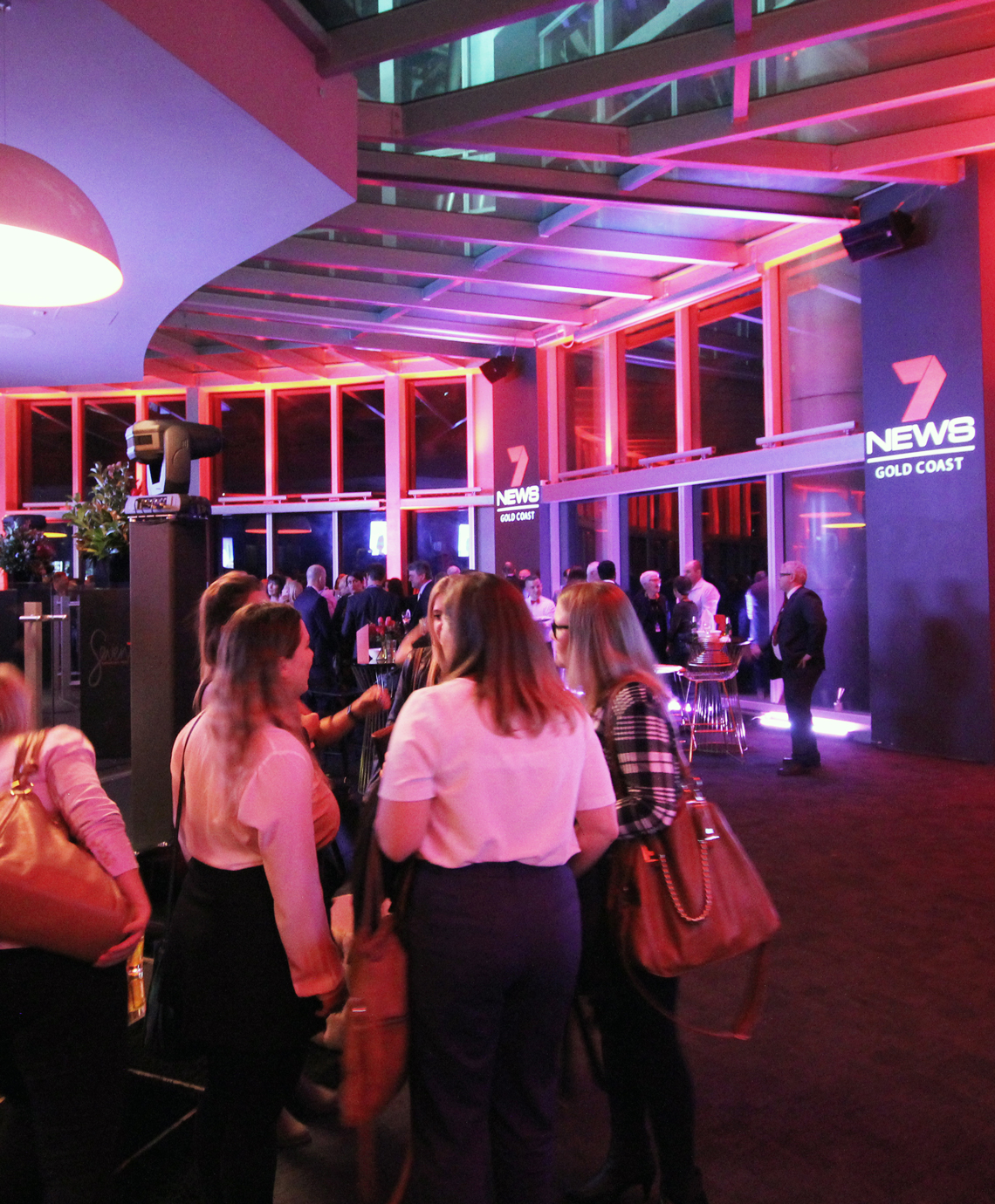 They also took the opportunity of testing the BMFLs on the set up night while they were in position – the furthest being onto a building 500 metres down the beach … With the gobo that big at the top of the building … it was clearly visible from over 1 km away.

“It was a great little test – impressive! The BMFLs did not miss a beat!”

Adam finds the BMFL an extremely powerful, versatile fixture and he likes the size and aesthetics which is especially important in a scenario like building them into a set. “You can use them on any event whatever the size or style”.

The two DL4X Spots, also owned by TLD Services, were used to light the main 7 Gold Coast News event space on level 77 of Q1, with the full colour gobos appearing in all their glory during the actual press launch on the observation deck. The visual vibe of the space here was modern elegance, and with the DL4X Spots being LED they ticked all the boxes including the one for expedient power consumption.

Talking about Robe general, Adam thinks the brand is in tune and on trend with what the industry currently requires and keeping abreast of the demands from every sector.

The 7 Gold Coast launch was a massive success and viewers in the locality now have the choice of three different news bulletins at 5.30 p.m. as 7 Gold Coast News started airing on 4th July, broadcasting from a new purpose built studio in Surfers Paradise presented by Rod Young. 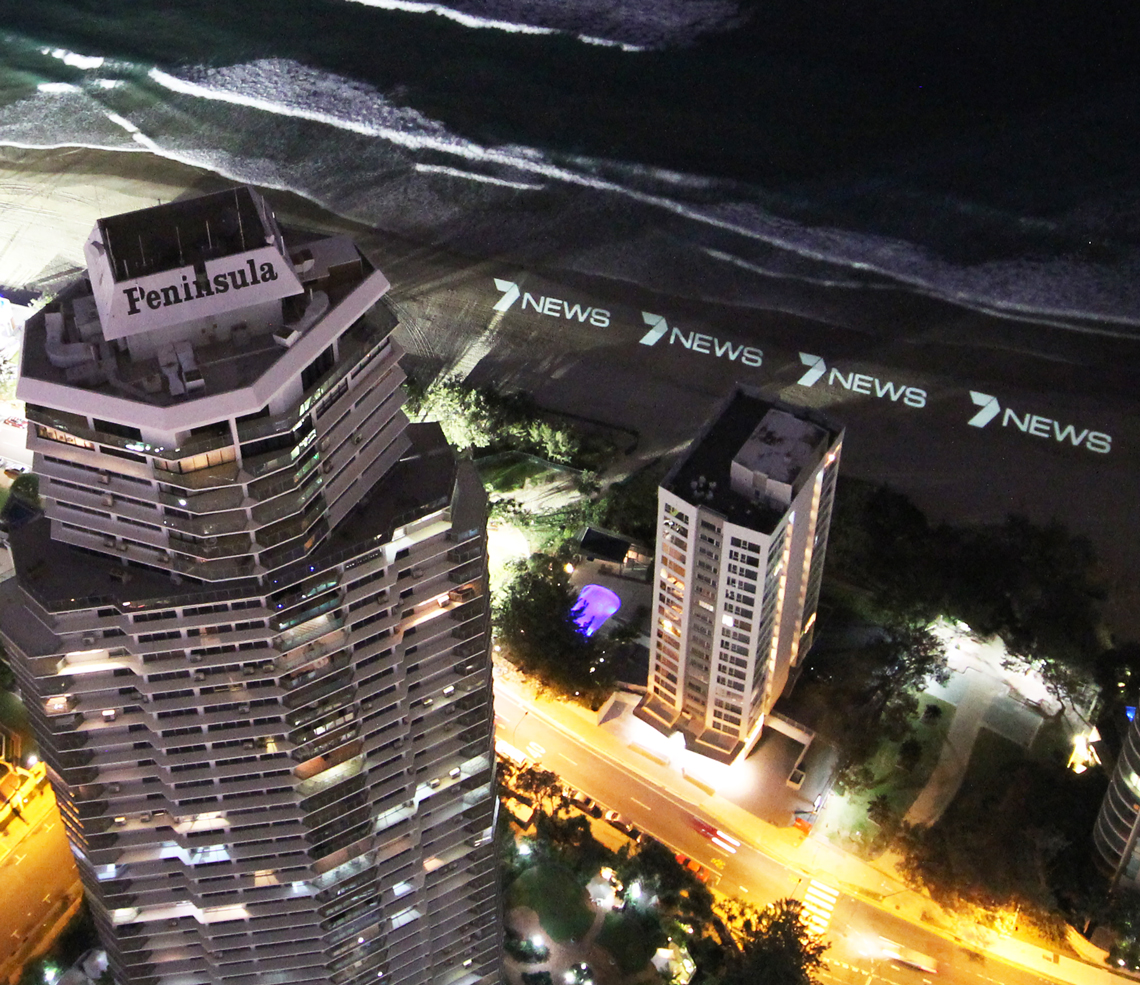