Staged at Lamborghini’s Brisbane dealership in Fortitude Valley, the streamlined and elegant racing-inspired Huracán STO, designed for ultimate driving fun on track and road, was the centre of attention.
With its 5.2 litre V10 nat-asp engine, extreme aerodynamics, super-sculpted 75% carbon fibre body including dramatic rear wing, LDVI control, CCMR braking technology and rocket-like 0-60 mph in 3 seconds … it was only fitting that Michael chose to match its amazing design and performance spec with the quality illumination from Astera!

The STO “hero car” in striking blue and orange marque, was always going to be the event’s focus. However, with clients and guests also very important, a range of other fabulous Lamborghinis in residence for the night needed highlighting as their owners parked up, so these were lit to provide multiple Instagram moments for guests to happy snap themselves amidst an array of vehicular art. 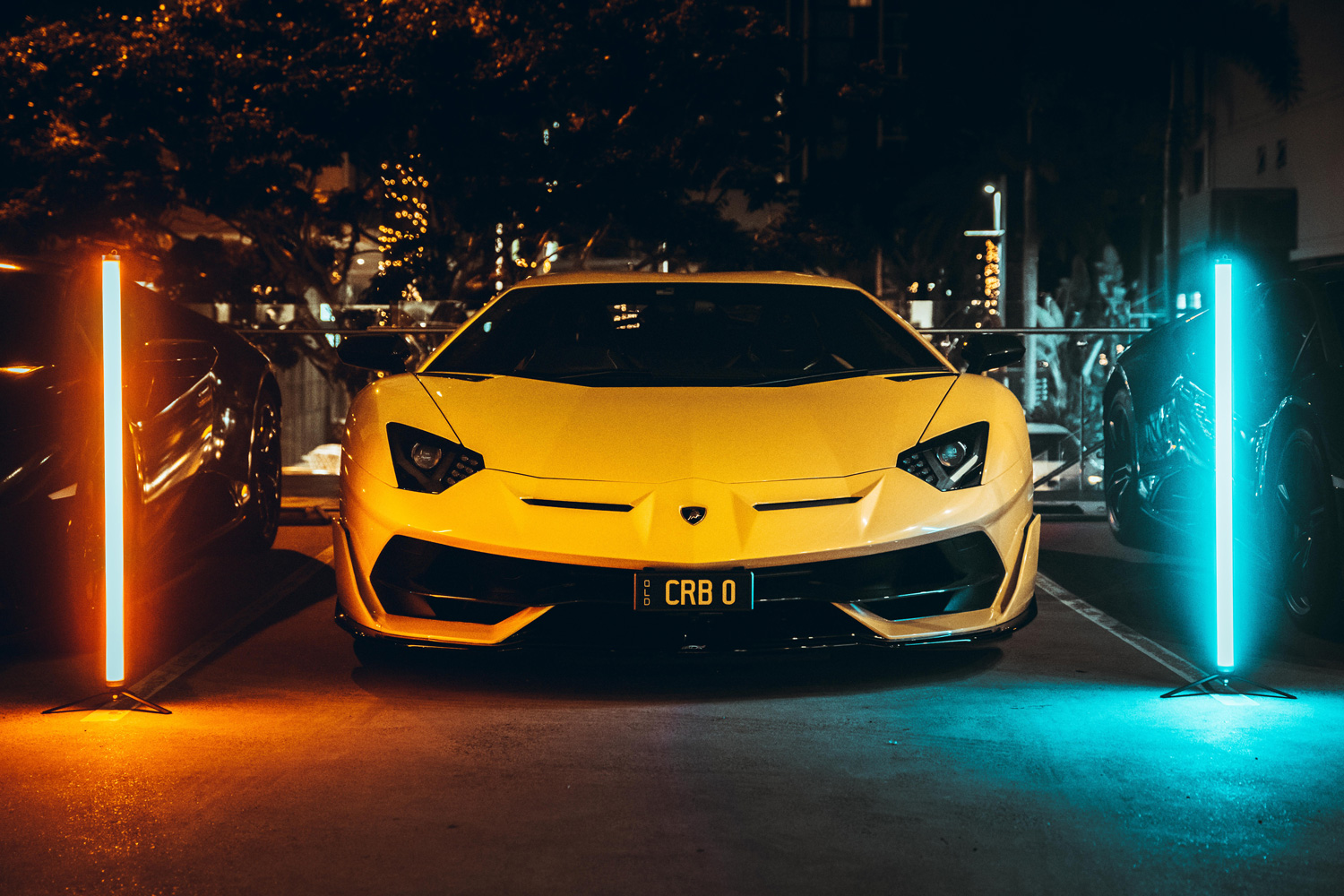 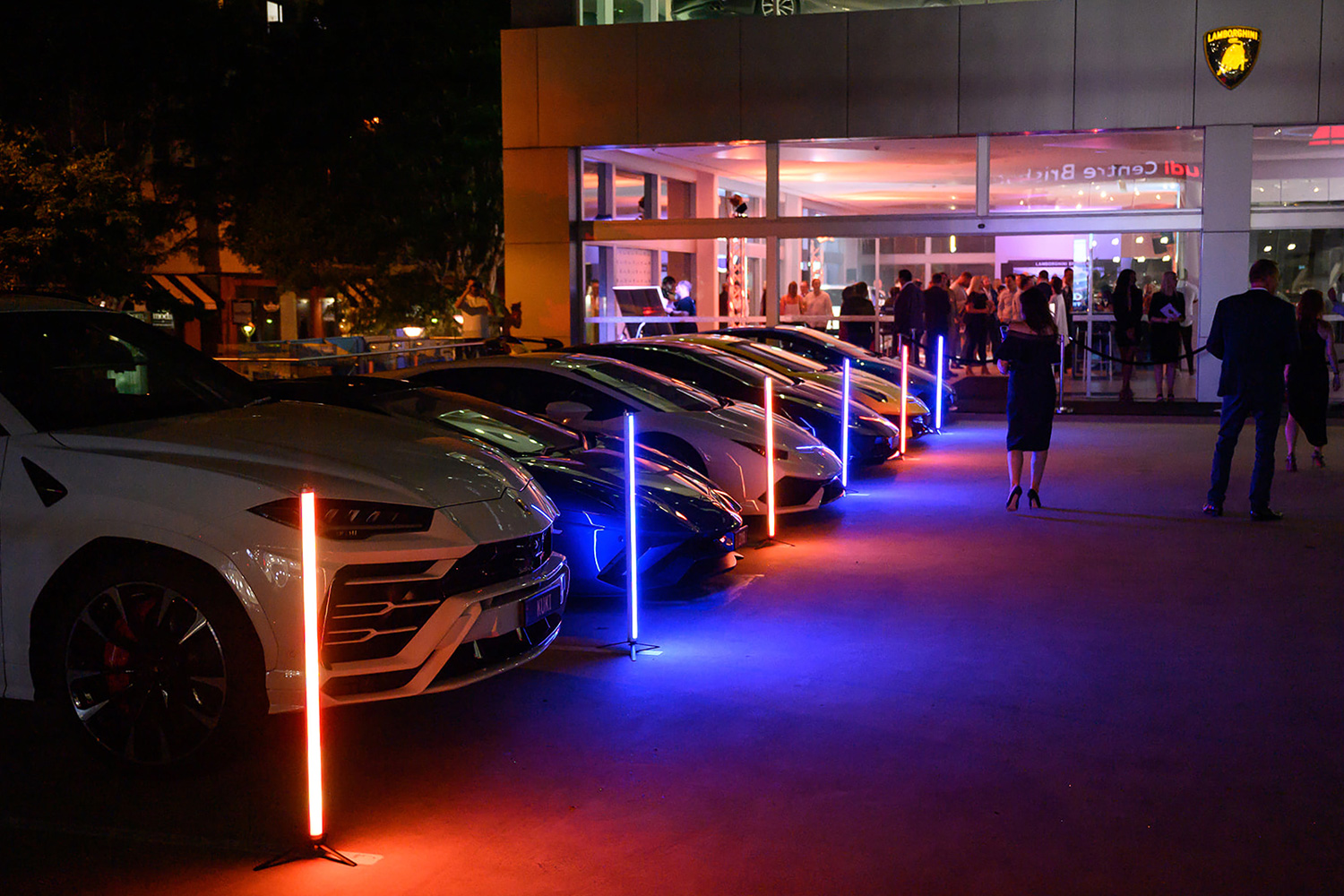 Michael received a “high-level” brief from his client relating to the mood and ambience they wanted to achieve inside and out of the premises, which was added to a budget and Michael’s fund of experience in lighting automotive events giving a free rein in designing what he felt appropriate.

Twelve vertical Astera AX1s were positioned around the car park on stands at the corners of each car space; another six were under the Huracán STO itself in the showroom and the remaining six positioned around the DJ booth.
The AX1s in the car park brought a “smart and futuristic” look to the space explained Michael, and the tubes also gave the impression that some cool intelligence was at work!

Empty spaces were denoted by AX1s set to a warm white, and as guests parked up, the Titan colour was changed to match the colour of their car (out of interest, what was the range of colours?) a touch of fun with which everyone could engage.

Once the STO was revealed, all the car park AX1s flipped into alternating blue and orange to match the hero car colour scheme.

The Titan Tubes under the STO were used in conjunction with moving lights and other fixtures on Michael’s showroom lighting rig for the reveal. They provided a sub car glow effect accentuating the accumulating smoke from the fogger placed at the back of the car for the start of the sequence, then became part of a combined strobing effect during the reveal build up, switching to a cool-white post reveal under-car wash for the rest of the evening.

The AX1s surrounding the DJ booth were set to produce random effects before the reveal segueing into a slow blue and orange fade chase afterwards.
The car park AX1s were controlled via AsteraApp on a tablet, with the colour wheel selector proving “very handy” for quick selection of the car colours as they parked up.

The other units were run via a grandMA Dot2 and wireless DMX. All kit was supplied by Scene Change Brisbane. “Portability and wireless operation were perfect for this application as cable management would have been a nightmare” stated Michael, adding the AX1 markers in the car park were a novel and well-received surprise. 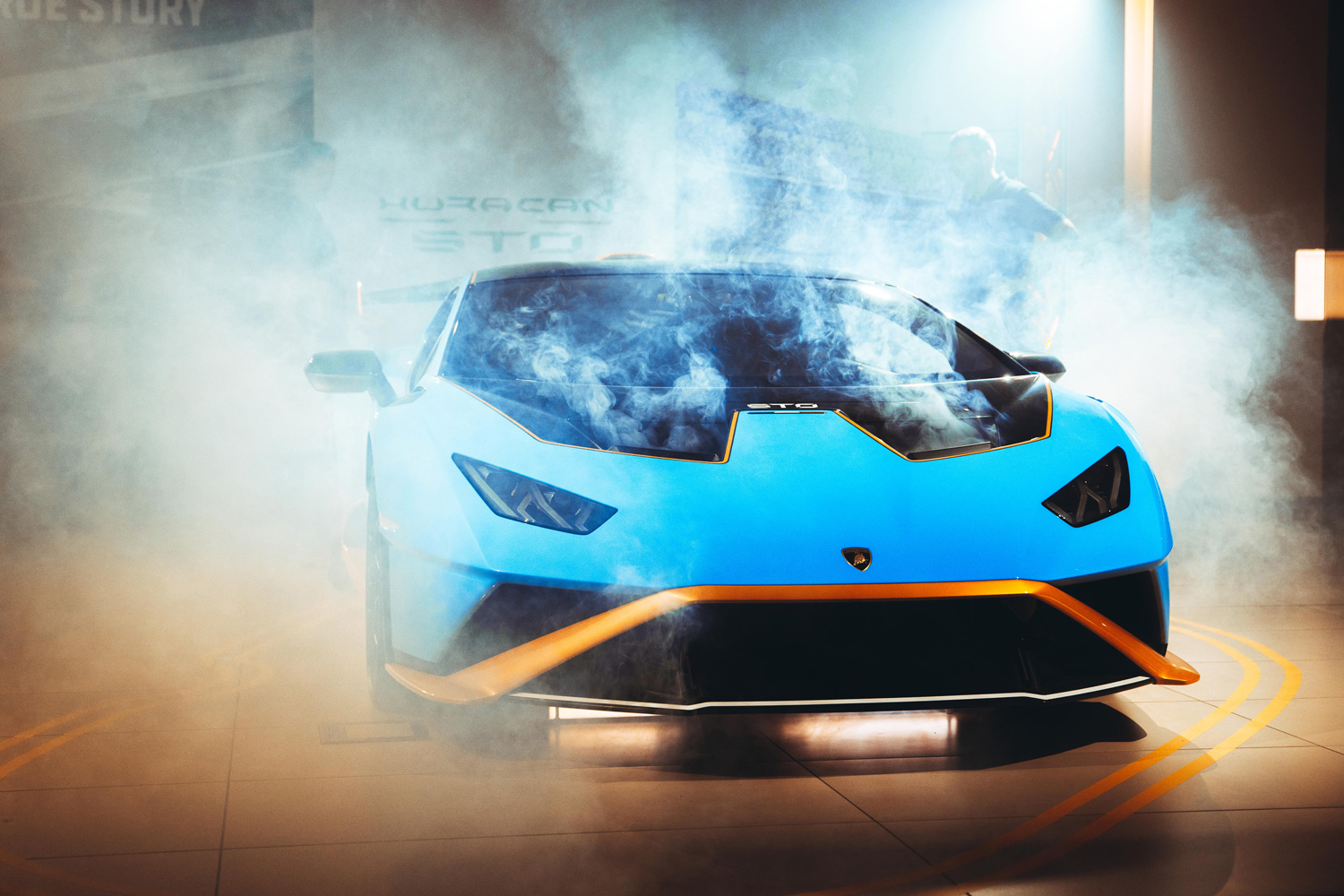 The car park AX1s were controlled via AsteraApp on a tablet, with the colour wheel selector proving “very handy” for quick selection of the car colours as they parked up.

Batter power was also extremely useful for this project as the dealership had only 4 x 20A circuits of power available for production, and that was needed to power a 10K laser projector and an expresso machine – without which no self-respecting Italian car distributor would be taken seriously!

“Using AX1s in all these locations was critical to getting the right look, tone and feel for this stylish and exclusive event” reiterated Michael.

He uses Astera products a lot in his work, and they are a ‘go-to’ for automotive shows due to their flexibility, wireless control, and colour range. The plastic construction also means they can be positioned close to expensive vehicles without worrying about any damage potential!

“I’m a big Astera fan” Michael commented. Having used Astera AX3 LightDrops, AX10 SpotMax’s and Titan Tubes extensively in his previous roles on the Queensland festival scene, when he joined Scene Change Brisbane permanently in 2018, he convinced them to invest in AX1’s – supplied by Astera’s Australia and New Zealand distributor The ULA Group – which he now uses “on virtually every job!”

For the next project, he is employing 96 x AX1s split beneath a Plexiglas floor and rigged on a custom shaped frame flown above the car!

Meet Jupiter. Made to Amaze.