Astera AX1 Pixel Tubes are doing their bit – both as energising effects luminaires and as practical lights – marking out the social distancing spaces – onstage at Delivered Live, a brand-new performance-based web streaming concept for music and comedy.

The show is broadcast weekly from The Studio at Harry The Hirer Productions’ HQ in the Richmond district of Melbourne, Australia.
The project is being driven by artist agency Handshake Management, technical and production rental company Harry The Hirer Productions and The Victoria State Government, offering a lively mix of entertainment from some of Australia’s most talented established and rising star artists who are based in and around the city.
It’s also designed as a fundraiser to provide vital financial assistance for those directly impacted by the devastating effect of the Coronavirus pandemic on the live show and events sector.
The Studio is the production / demo area within Harry the Hirer Productions’ copious main office / HQ facility, a large technical ‘development space’ complete with lighting and audio consoles, previz viewing, etc., all intended for LDs, engineers and production designers to block, program and work on their projects. 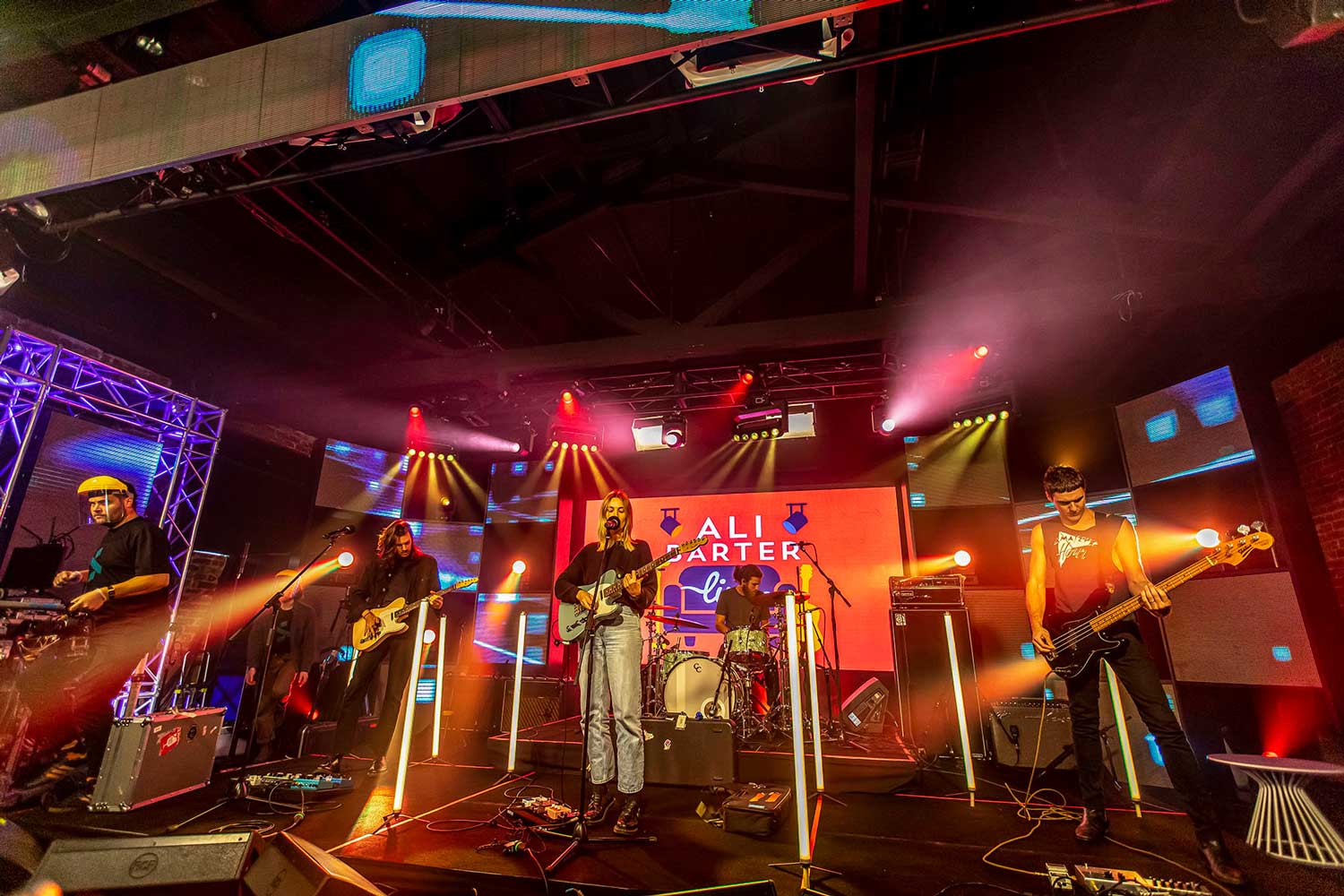 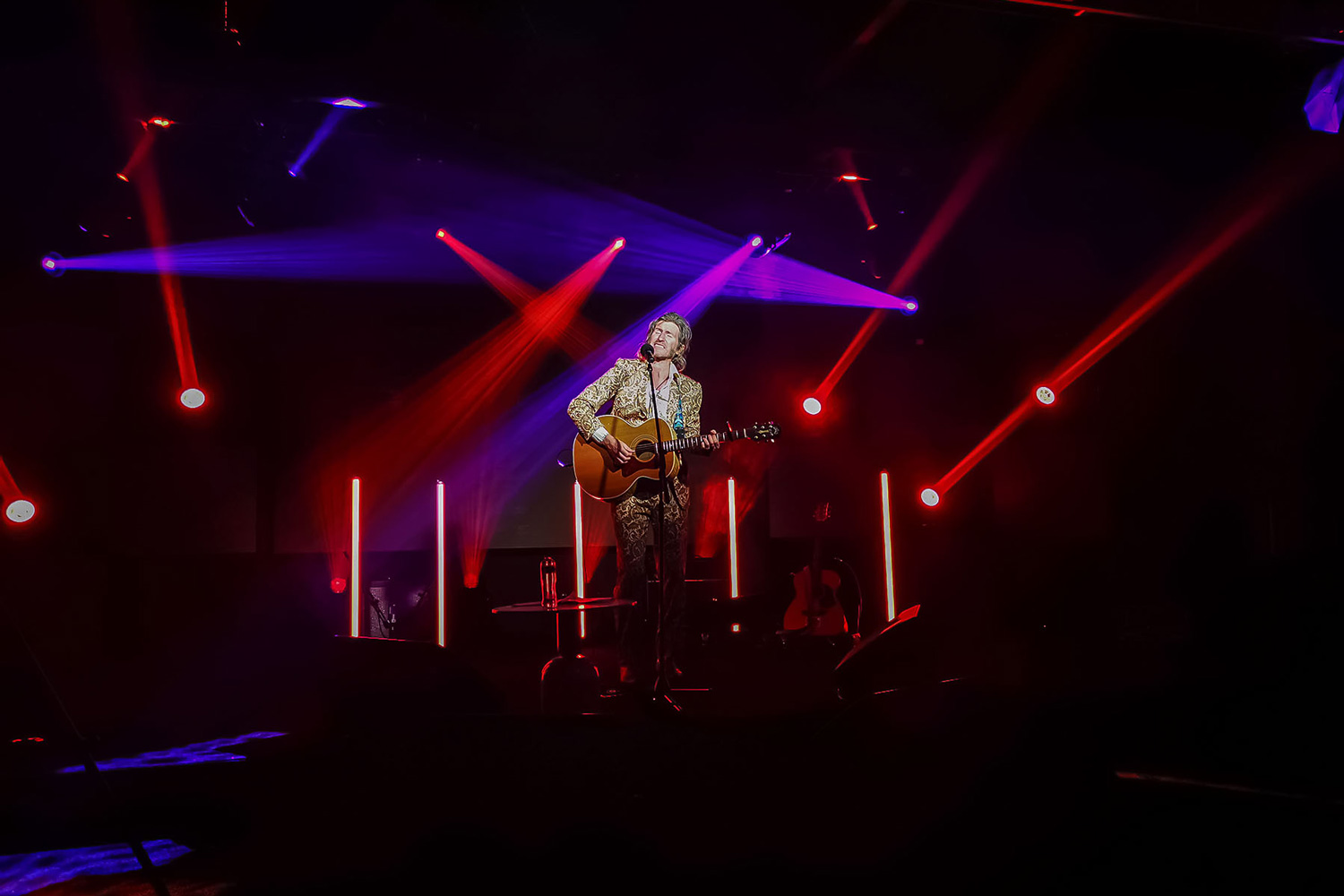 Delivered Live’s lighting designer is Marcus Pugh who works full-time for Harry The Hirer Productions, usually as business development manager which also entails some production design.
To light the 2.5-hour webcasts, currently being streamed every Saturday evening, he is using a variety of lighting fixtures including the Astera AX1s as well as Astera AX3 LightDrops and AX5 TriplePARs.
The event operates within strict social distancing guidelines, with a maximum of 10 people in the 250 square metre studio at any one time. A bespoke built stage offers separate areas for bands (up to a 6-piece) and comedians, each with their own personal space marked out with AX1s.
“The beauty of using them for this very important task as a visual barrier, is that they can also be fully incorporated into each performance as a lighting element,” explained Marcus. “Being wireless is an absolute perfect solution for this scenario in a relatively confined stage space … no mess or fussing with cables!”
He is also using additional AX1s – up to 16 in total – dotted around the rear and sides of the stage as back-of-camera effects lighting. “They look great on camera in an arc behind a solo performer,” he commented, and he can also utilise them for set dressing and a wide range of improvised effects, all run through his grandMA light control console.
Marcus is a big fan of Astera generally and their various fixtures have featured in his designs for the last couple of years.

To light the 2.5-hour webcasts, currently being streamed every Saturday evening, a variety of lighting fixtures are being used including the Astera AX1s as well as Astera AX3 LightDrops and AX5 TriplePARs.

The AX3s – handy for their tiny size, big punch and magnetic bases – are used for lighting around the bar area, behind which Delivered Live presenter Henry Wagons sits at a safe distance introducing each act. The performers also shimmy over to the bar for a short interview after their set, a routine that’s become a favourite part of the webcast.
“For every job on which I normally go to site, I will grab a couple of cases of AX3s and some AX5s and put them on the truck … as we can always find something to light with them! They are an invaluable tool on any event!”
In The Studio, the AX5s are being used to up-light the walls and provide general lighting for the host position.
On the very first act of the first Delivered Live broadcast – when everyone was still ‘feeling’ their way around – the cameras were shooting a flat-looking upstage brick wall … which was quickly transformed into a dynamic backdrop with four AX5s as up-lighters. Again, being wireless makes them grabbable and quickly deployable; “you can literally put them anywhere – plonk-and-play – they will do a great job and look excellent!”
Harry the Hirer’s stock of Astera fixtures were supplied by ULA Group. 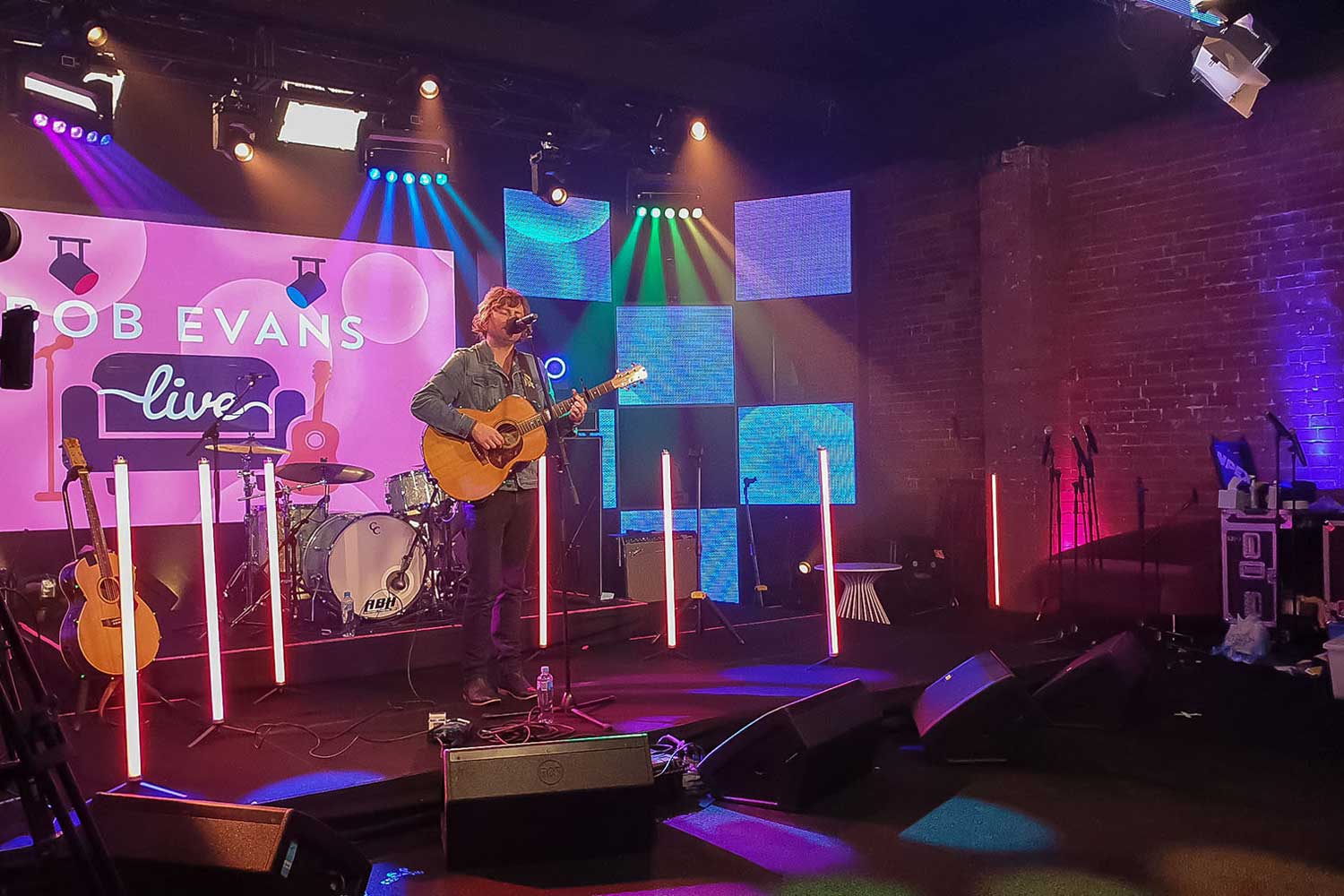 “For every job on which I normally go to site, I will grab a couple of cases of AX3s and some AX5s and put them on the truck … as we can always find something to light with them! They are an invaluable tool on any event!” Marcus Pugh – Delivered Live’s lighting designer

As Marcus usually only occasionally gets hands-on behind the lighting board now … he is loving this opportunity to polish his operating skills, as well as being very proud to work on the show which is bringing some much-needed live entertainment during the lockdown.
Delivered Live is currently drawing around 20,000 viewers and selling over 2000 ‘tickets’ each time.
The show is free to stream, and viewers are encouraged to donate the equivalent of an average gig or concert ticket if they can afford it, and the money is divided up between the participating artists and crew. Each act also nominates one person on their regular road crew plus their favourite performance venue … to also receive a percentage of the funds!
The show is directed by Scott “Ando” Anderson and others involved in the technical production include Ian Kirkwood (webcast & vision systems), monitor engineer Richard Whitty, FOH audio engineer Travers Chesney and stage audio technician Sam Beresford. The camera operators / vision mix is by Small Time TV, Nick McKinley & James Seymour, the tour manager is Luke ‘Boo’ Johnston, artist liaison is by Johnny Salerno and video production is by Zig Parker. Terry Lowe is providing additional MA programming.
Lighting, audio and LED screen kit is all supplied by Harry the Hirer Productions, with cameras and additional video equipment from Small Time TV.