Some 72 nations and territories came together July 28 – August 8 in Alexander Stadium in Birmingham, England, for the 2022 Commonwealth Games. Lighting the Opening and Closing Ceremonies of the quadrennial multi-sport event was Al Gurdon of Incandescent Design who used over 300 Elation Professional IP65 Proteus luminaires to light the festivities.

The Opening Ceremony was a visually spectacular and at times emotional show that featured dance groups, dream sequences, cultural parables, humor and even a 10-meter tall mechanical bull. A cast of thousands traced Birmingham’s history through themes of unity, diversity and resilience with the evening capped by a medley of hits by local heroes Duran Duran. The Closing, just as impactful, focused on the region’s unique musical heritage with performances by UB40, Jorja Smith and Dexys Midnight Runners, among others, including a surprise appearance by veteran rocker Ozzy Osbourne.

Some 72 nations and territories came together July 28 – August 8 in Alexander Stadium in Birmingham, England, for the 2022 Commonwealth Games.

Lighting a high-profile, outdoor event
Needless to say, there was plenty to light in the form of sets, scenery and artists, both for the live crowd of 30,000 and the estimated global broadcast audience of more than a billion. Gurdon, however, is a veteran of high-profile sporting event ceremonies, having designed lighting for the 2014 Sochi Olympics and served as Director of Photography on the 2012 London Olympics. He has also lit several Super Bowl Halftime shows and knows what type of lighting is required for a show of this caliber. “It’s an open-air show without a roof, with equipment in place for several weeks, so waterproof fixtures are important, and so is reliability,” he said.

Proteus Rayzor Blade debut
The Maximus and Excalibur fixtures have featured on many large projects but the Commonwealth Games marked the debut of the Proteus Rayzor Blade, a tiltable linear LED light that functions as a wash, strobe or FX light. “To be honest, the Proteus Rayzor Blades were our only option because we needed a tiltable waterproof batten and, as far as I am aware, there aren’t yet any alternatives,” Gurdon said of the RGBW fixtures, adding that they are also extremely bright. “I also wanted something with a decent zoom range because some of the action would be quite close, so they needed to go wide.”

Available with 6 or 12 independently controlled 60W LEDs, the fixture zooms tight to 6° for mid-air beams and out to 45° for washes and a 210° tilt rotation allows them to position dynamically. The designer arrayed the one-meter-long versions around the ‘bullring’ in the center of the field of play. “They served duty lighting mass cast, accenting, and defining of the space,” he says. “They were also useful for lighting action above the ground without hitting the ground itself.” The fixtures are unique in other ways as well. Two high-intensity strobe lines of cool white LED dots run along the length of the unit, and they also include Elation’s proprietary SparkLED™ twinkle effect for added design choice. 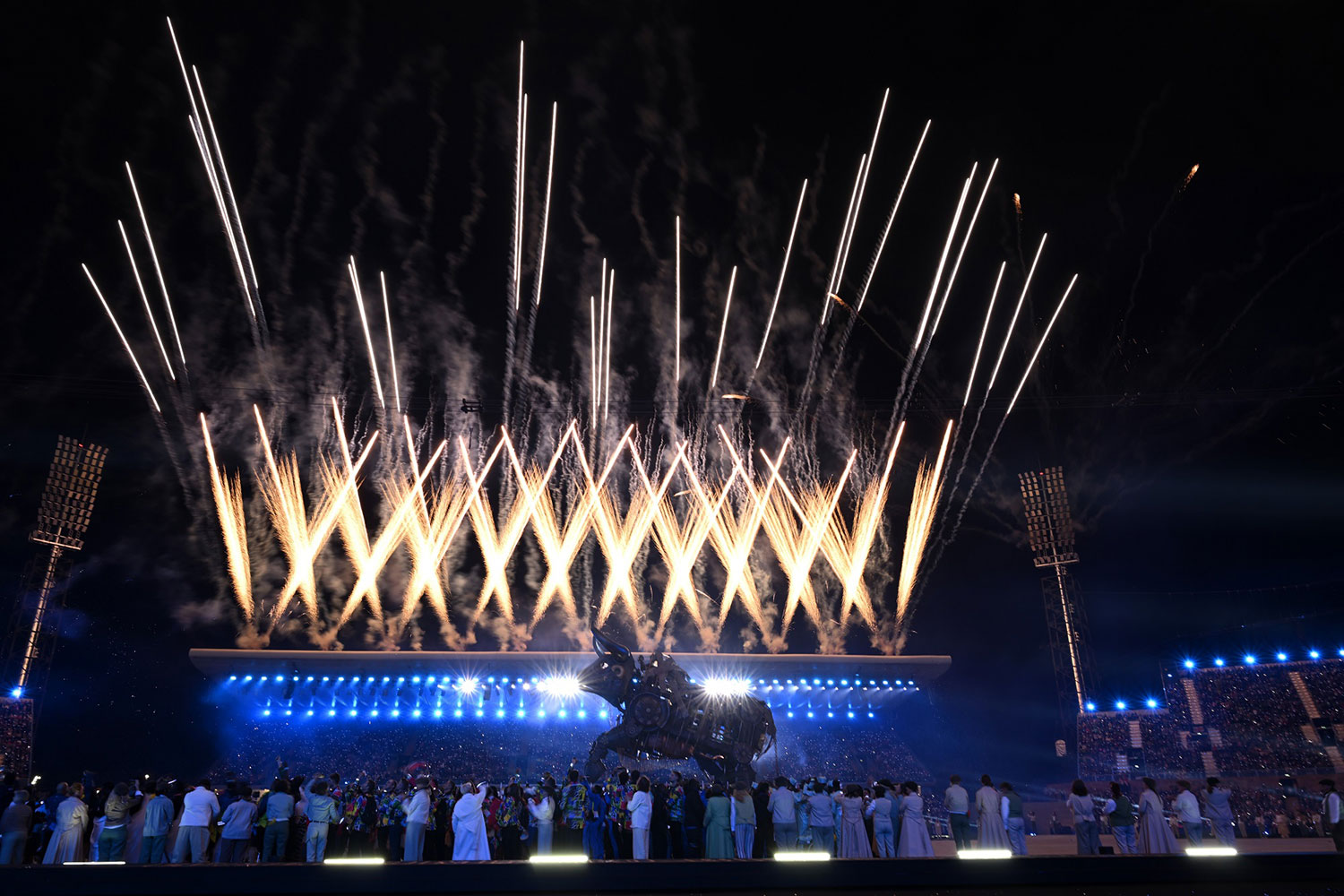 The Maximus and Excalibur fixtures have featured on many large projects but the Commonwealth Games marked the debut of the Proteus Rayzor Blade, a tiltable linear LED light that functions as a wash, strobe or FX light. 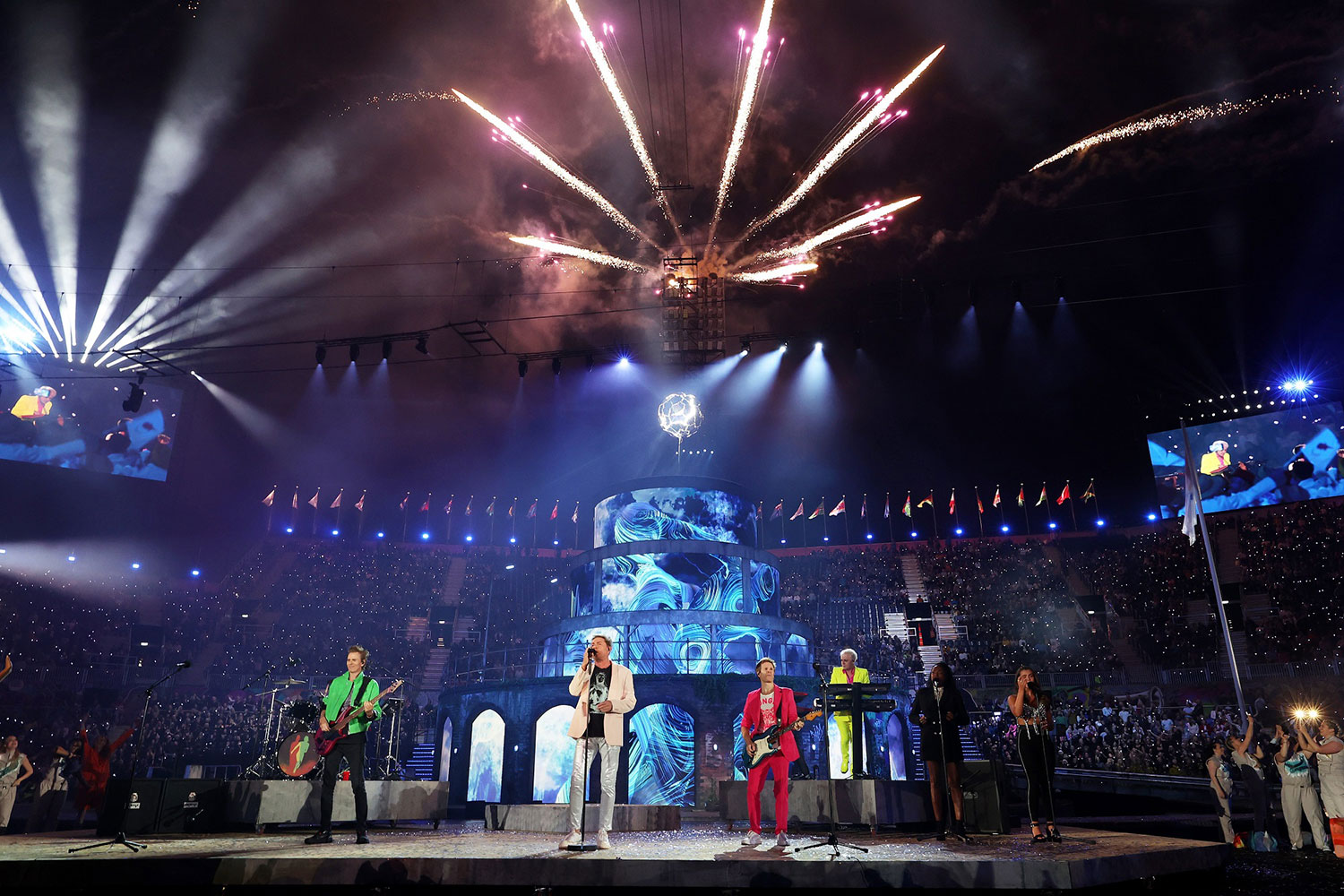 Excalibur and Maximus
For the Opening Ceremony, Gurdon lined the athlete’s path with Proteus Excalibur narrow beam moving heads and positioned additional units on audio carts. The 20,000-lumen Excaliburs with their 0.8° beam were primarily used for attention-grabbing searchlight effects. For the Closing Ceremony, which Gurdon says was much more about music than the Opening, he moved the Excaliburs to the ‘upstage’ east side to get a strong floor backlight for the musical performances. Meanwhile, from positions high on the stadium, a battery of 50,000-lumen Proteus Maximus moving heads were used as a bright, shuttering, weatherproof fixture whose principal function was “keying the action” rather than as effect light.

From a lighting perspective
The Opening and Closing Ceremonies were two very different shows, according to Gurdon, and both reportedly went very well. “I was particularly pleased with the Closing because from a lighting perspective it was completely unrehearsed,” he remarked. “Because the Games were taking place in the stadium, the rehearsals took place at a 1:1 site on the other side of the city, and because all of my key lights stayed rigged throughout, there was no way of rehearsing with them.

For the Opening Ceremony, Gurdon lined the athlete’s path with Proteus Excalibur narrow beam moving heads and positioned additional units on audio carts. The 20,000-lumen Excaliburs with their 0.8° beam were primarily used for attention-grabbing searchlight effects.

“Furthermore, the show was extremely complex from a staging and camera perspective so we had to rely on very careful preparation in terms of analyzing those rehearsals in situ and, crucially, from camera recordings, which was often our only way of seeing what was going on. We kept our pre-viz throughout, and without it it would have been impossible to do the show to the standard that we eventually achieved.”

Fantastic team
By any standard, the Birmingham 2022 Commonwealth Games was a rousing success and that goes for the production team as well. Naturally, it takes a village to light an event of the magnitude of a Commonwealth Games, and Gurdon is forthcoming in acknowledging the team effort. “I cannot overstate the contribution of my fantastic team,” he shares. “Ross Williams and Alex Mildenhall as lead programmers with Ben Hornshaw providing systems support and management on site, and Nikita Jakovlev in pre-viz. Vision Supervisor Emelie Scaminaci produced beautiful pictures throughout, and Chris Henry spot-called two extremely complicated shows with a team of operators with only a small number of professionals, but the majority volunteers who had never done it before.”

Gurdon concludes, “Zoe Snow and Gary Beestone [Birmingham Ceremonies] put together a fantastic team of creatives and technical chiefs and crew, and led and supported us all in this massive project throughout with a rare combination of great experience, calm professionalism, and great humor.”