Behind the Innovation with Elation Professional

If LED is king, why do we still need discharge lamps?

With benefits like greater reliability, increased energy efficiency and less maintenance for a lower cost of ownership, the transition from discharge lamp-based lighting fixtures to LED source luminaires in the entertainment lighting industry was understandable if not inevitable. Then, as LED engines began to compete with discharge-based fixtures in terms of brightness, the writing seemed to be on the wall—it was only a matter of time before discharge-based luminaires would disappear completely.
But that hasn’t been the case. So why are manufacturers still launching lighting products with discharge sources?

“It’s really about what you want to accomplish optically,” states John Dunn, National Sales Manager at Elation Professional’s headquarter office in Los Angeles. “The physics behind an LED source don’t make sense for all types of fixtures and some effects are still not achievable with LED. A great example is a long throw beam fixture. When you need that pronounced beam of a narrow beam aperture product, you just can’t duplicate the center intensity that a lamp and reflector gives you with an LED engine.”

With benefits like greater reliability, increased energy efficiency and less maintenance for a lower cost of ownership, the transition from discharge lamp-based lighting fixtures to LED source luminaires in the entertainment lighting industry was understandable if not inevitable

Which begs the question, why not?

Roger Hamers, R&D head at Elation’s European office in the Netherlands, explains. “It has to do with the construction of the lamp working with an internal reflector. The size of the lamp and reflector is key. With a discharge lamp, because it is relatively small, the focal point is very near the output of the light, which gives you a narrow, very intense beam. You could do the same with LED but because of each LED’s relatively low wattage, to get the same effect you would need a very large LED chip and quite a large reflector so the size of the fixture would be too big.”

Discharge lamps involve an internal electrical discharge between two electrodes in a gas-filled chamber, and it’s at that point that the level of intensity is extreme. It’s that power that can be harnessed, isolated and thrown out as a collimated beam of light. When producing an ultra-narrow beam with an LED source, that concentrated intensity is missing and consequently the beam lacks density and doesn’t travel as far. “It’s at distances that you really begin to notice differences,” Hamers says. “With an LED engine, you don’t have the pronounced center intensity that you are looking for in a long throw narrow collimator beam fixture.”

Hamers explains that in the past, with a discharge lamp, a somewhat large reflector was needed because the electrical arc was relatively big, around 1 cm. “Today though we have tiny discharge lamps with arcs of only millimeters,” he says. “The Platinum lamp for example has a very small arc of only about 2mm. The light is concentrated in an incredibly intense beam which lets you build a powerful light in a much smaller housing.”

Roger Hamers, R&D head at Elation’s European office in the Netherlands, explains. “It has to do with the construction of the lamp working with an internal reflector. The size of the lamp and reflector is key.”

It’s that discharge lamp technology that Elation Professional has exploited so successfully, even as it developed and transitioned the majority of its product line to LED. Working with Netherlands-based Philips lighting to develop the Platinum lamp, a cooperation that goes back to 2007, the short-arc design with its brilliant, intense light opened up all new possibilities for Elation engineers. The result was a series of Platinum lamp luminaires starting in 2009 and culminating in the breakthrough IP65-rated Proteus Hybrid in 2017. Then Platinum lamp technology advanced even further with the introduction of Platinum lamp FLEX technology.

“With the Platinum FLEX lamp, basically we have packed the advantages of LED into a discharge lamp,” states Marc Librecht, Sales & Marketing Director at Elation Europe. “Lamp life improved significantly—five times or more compared to traditional lamps—which has lowered lamp costs over the lifetime of a fixture. The discharge lamp/ballast allows it to be dimmed and set to hibernation mode when not in use. This lowers power consumption and reduces heat, which protects electronic components and reduces overall fixture maintenance. We are now reaping the advantages of both worlds with a new type of discharge lamp.” 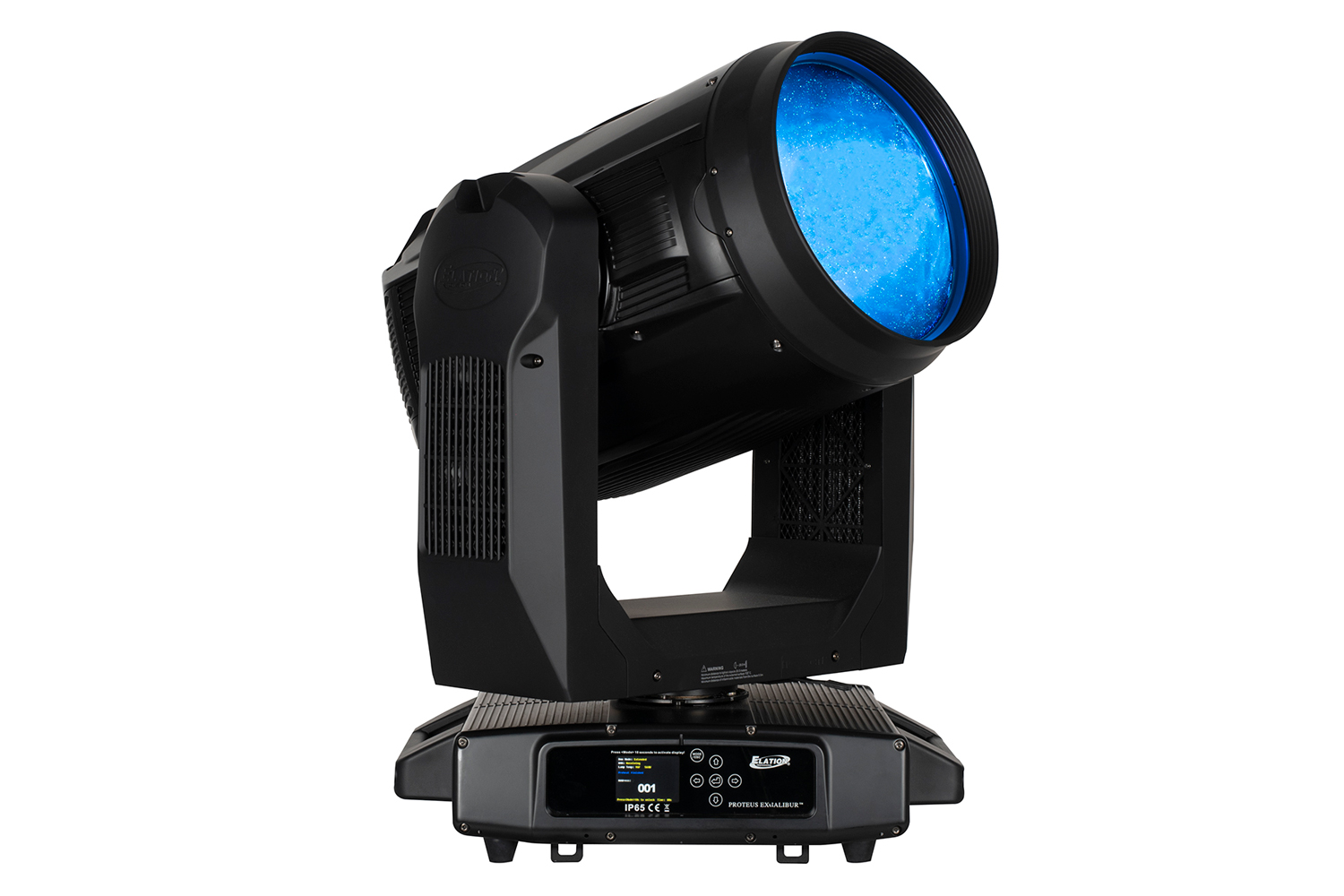 “With the Platinum FLEX lamp, basically we have packed the advantages of LED into a discharge lamp,” states Marc Librecht, Sales & Marketing Director at Elation Europe. 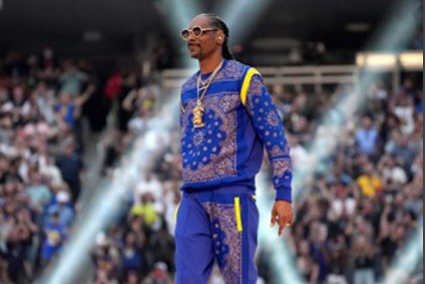 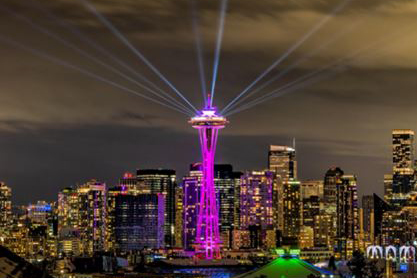 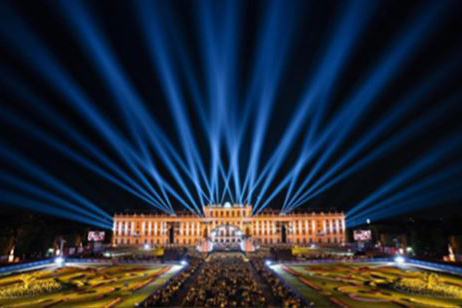 The Platinum FLEX lamp opened up a revolution in savings for discharge-lamp luminaires yet its development was always about more than economics. “Again, it’s about what you want to accomplish optically,” Dunn reiterates. “In fixtures like our beam/spot Smarty series that excel at aerial effects, you want more intense narrow beam optics that can really define a beam or pattern and a short-arc discharge source gives you that. It also gave us the freedom to create smaller and lighter fixtures that have as much punch as much bigger models.”

The latest fixture to benefit from the FLEX lamp technology is Elation’s Proteus Excalibur, a 0.8° beam fixture with MSD Platinum 500 FLEX lamp that launched earlier in the year. “Our goal was to create a really powerful beam moving head fixture that could replace xenon searchlights,” remarks Roger Hamers. “We just weren’t able to create that high beam intensity at this level with an LED engine, not yet anyway.”

So will LED ever be a feasible replacement for long throw discharge lamp-based fixtures? Haitz Law, the principle that the amount of light generated per LED package increases by a factor of 20 each decade, tells us so. Elation’s R&D team has stayed on the forefront of the technology and has already developed products with LED engines that mimic the center intensity of a discharge source.

“We’re emulating that center peakness of a lamp in some of our LED products already,” says John Dunn. “The Proteus Lucius, Proteus Maximus, Artiste Mondrian, and Artiste Rembrandt all have a first-of-its-kind high-center-intensity white LED engine designed to create that parallel collimated beam with the pronounced center. The ratio is not as pronounced as with a discharge lamp but they are very impressive at distances and a big step in the right direction.”

We all know that LED is the future—and very much the present—but until an LED can pack more punch in a smaller space, discharge-based luminaires still have an important role to play in the entertainment technology industry.