Courtesy of CX Magazine.
This review was created by and published in CX Magazine, Nov 2018.

Dan Evans is a renowned Lighting Designer based in Melbourne Australia. For over 20 years, he has designed a wide variety of shows and events in Australia and around the world. He specialises in high impact technical production and creative portrayal of emotion through the medium of light, visual imagery and special effects. He has designed shows for audiences around the globe in theatre, film and TV, concerts, and corporate events.

I’m currently touring ‘Madiba the Musical’around Australia, visiting the Melbourne Comedy Theatre, Sydney State Theatre, Canberra Theatre Centre, Crown Perth, Adelaide Entertainment Centre, and Warrnambool Lighthouse Theatre. We’re using seven XA-1000s in the rig and carrying one spare. Five are hung on the advance FOH truss, and they handle all front wash duties and all lighting of faces. I have two hung over the stage for break-ups on the cyc, and for pick-ups as a rear spot.

At NW Group, we are looking to LED solutions to address power consumption, in line with the company’s Green Energy policies. We have undertaken a lot of research in finding new LED fixtures for our inventory, including bringing a wide selection into the NW Group factory for shootouts. I had been researching the Acme brand for a while, but there were a few technical issues that I had with their spots that made us hesitant to purchase. Through discussions with Acme and their distributor ULA Group, they addressed the issues I raised. When we next brought the Acme products in for demo I was quite impressed.

We needed a fixture for ‘Madiba’ that had nice colour rendering, high output, and a wide zoom. The XA-1000 BSWF is an extremely bright fixture; I could light the whole stage with just one, they’re that bright. I’ve been extremely impressed with their performance on this show so far. They’ve been very versatile, and I’ve got them working very hard through the whole show.

I turn the XA-1000s on when I come in to the theatre every day, and they go straight to their preset without fail. I haven’t had to update them once. I have cues with picture frames that fly in and the XA-1000s have a tight focus to their edge – that cue hasn’t been updated once either, which is also testament to the fly crew, who’ve been amazing!

I use the CRI filter a lot, and the colour rendering is great. The XA-1000’s CRI is over 90, which is perfect for TV, theatre, and film. ‘Madiba’ has a diverse cast, which means there are a wide range of skin tones I need to light, and the XA-1000 has enabled me to do that well. I have been able to bring out different shades in both costumes and skin, allowing me to create a lot of really nice looks. I haven’t been using the prism, but I have used the frost filter, which I’ve found useful and smooth. The dimming curve is also very smooth, and when I fade my dimmers along with my movers, everything is exactly synchronised.

I use the framing extensively through the show, and it hasn’t skipped a beat. There is heavy framing, focusing, and zooming throughout the show, and the XA1000s work quickly, getting to their spot within milliseconds.

I have found that on some fixtures, when you have the frames in with a tight zoom, and you bring the colour flags in, it creates a slightly different coloured spot in the centre of the beam. I haven’t noticed this issue at all in the XA1000s. It’s a uniform colour across the whole beam.

As ‘Madiba’ is about the life of Nelson Mandela, the show spends a lot of time covering the periods he was imprisoned. One of the key things I needed in a fixture on this show was the ‘jail’ gobo. The XA-1000 has one, and when the cyc isn’t being projected
on, the two XA1000s on stage hit it with break-up gobos and the jail gobo, which has worked phenomenally well.

There’s one rotating and one static gobo wheel and I found the included gobos useful. I have talked to Acme and mentioned that I’d be happy to lose one gobo wheel if they’d replace it with an animation wheel, as being able to do moving textures with frames would be really nice. There’s some talk of a later model, so hats off to Acme for listening and changing designs based on customer’s needs and feedback.

” The XA-1000 BSWF is an extremely bright fixture; I could light the whole stage with just one, they’re that bright. I’ve been extremely impressed with their performance on this show so far.”
– Dan Evans, Lighting Director, NW Group 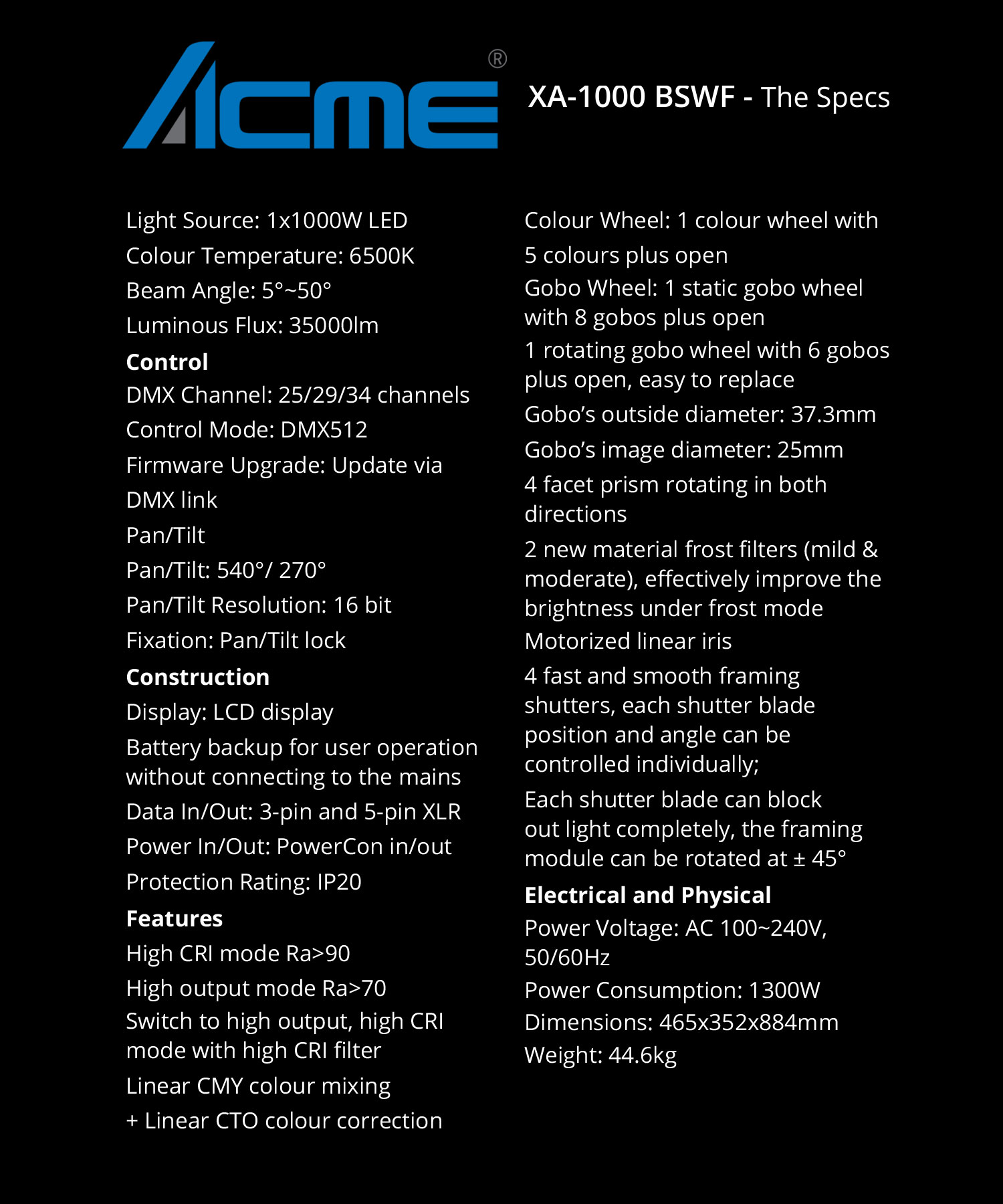 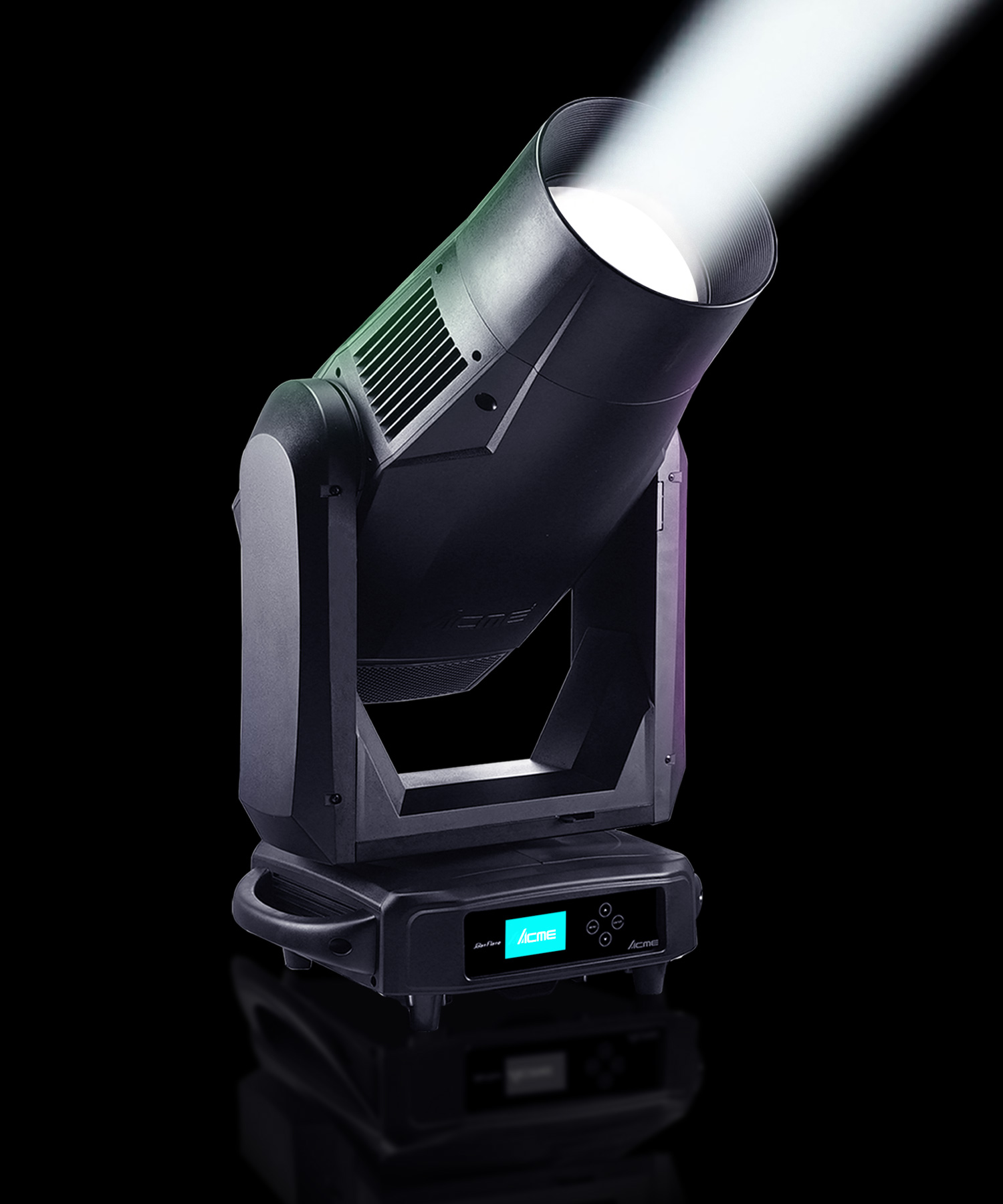 The zoom is fantastic, and I can get quite close to covering the whole stage at its widest. The brightness of the output at full wide is phenomenal; they’re not far off highpowered arc lamps.

The clamps on the XA-1000s are quite unique. They’re mounted on top and fold down at right angles for storage in the case. The clamps are always on, so you just open the lid of the road case, put the clamps up, and hang them, though you can remove them if you wish. At just under 45kg, they’re a comfortable lift for two people. As we rig five on the FOH truss, we have to hang them over seats, which is an awkward area to get a fixture into, but we’ve had no problems.

We tour one XA-1000 per case, and the cases are easily manageable. They’re quite small and you can get at least five across the width of the truck, with the plus that you can flip them and stack them any way you need to.

As this is theatre, the noise of fixtures can be an issue, but we can’t hear them. The XA- 1000s have a lower power/noise mode, but I haven’t had to use it. They’re also quiet when they move.

One of the improvements I’d like to see is the reduction of the large space between the gobo wheel and the framing shutters. At NW Group, we do a lot of corporate gigs, and one of the things we need to do is frame screens while putting a bit of texture around them. You can do it with the XA-1000s, and there’s a few cues in ‘Madiba’ where I frame gobos, but I have to do it at a wider zoom, and I can’t get an edge quite as hard as I’d like. However, you can’t have everything, and as it is, the XA- 1000 already ticks all the boxes.

On the East Coast leg of this tour, the XA- 1000s haven’t skipped a beat – how they react to the long truck journey through Adelaide to Perth and back will be the test. That being said, ULA Group’s support is great, and I know if anything happens, they’re
there for us. The XA-1000 BSWF is a solid, bright fixture that has done a great job. I’ve been impressed by every aspect of its features as a mover, and it all works as you need it to. For the price point it’s really good value. I highly recommend them.