Birds of Tokyo tours with TLD

Good Lord, what a tour!

Aussie legends Birds of Tokyo have just completed nationwide ‘Good Lord Tour’, with 11 sold out shows around Australia, adding extra shows in Adelaide, Perth and Melbourne and upscaling to bigger venues for a huge success!

The band approached Adam Volz, Creative Director of TLD Services, for a unique design to step up their Good Lord Touring package for their recent tour last month. “With sold out venues in every city, we knew we would be throwing all the bells and whistles to make this tour the one to remember”, says Adam. “With less than a week in pre-production, we were fine tuning as we went. The audience only saw the final result, but it was an awesome challenge working closely with the band directly to get the end result and feel that was required from everyone.”

We were out to test the Acme Product in a touring sense and they did not disappoint for an operational stand point.

Adam’s experience with complex programming from his career with large format shows from Broadway with The Walt Disney Company, to the high-end corporate business which has given the design side of TLD’s edge to push the creative boundaries, allowed TLD to create the visual balance required. Adam and his team do a lot of under the radar events and supply a high-end professional service to a unique range of clients. “We have always set out the supply the best service no matter the size of the event”, stated Adam.

From the front truss to the floor package with customised content made to suit the mapped surfaces. There were 5x 3m 290mm black box truss pieces on the new 1200x600mm touring plates with out riggers and wheels that hugged the band from back to front. Mid-stage saw more uprights to complete the floor package. Three Acme DotLine 360 moving LED Bars on the top of each upright, helped the looks keep rolling. “It was a tough balancing act to get the right feel between all the elements as per the bands creative requirements and adding the lighting side to create a mood change as big as the band themselves”, says Adam.

The Lighting Rig consisted of: 7x Acme 20R BSW, 12x Acme 280 Beam, 8x Acme 350 LED Wash, 15x Acme DotLine 360 Moving Bar and 6x Acme BL200 LEDBlinder. “We were out to test the Acme Product in a touring sense and they did not disappoint for an operational stand point”, confirms Adam.

From the big white look that started the show with ‘White Witch’, a huge hit off the album Universes and was well entruley unexpected from the audience. During the show, the DotLine’s were utilised as either video fillers or they were added for extra zing to the lighting looks. All content was customised to suit the broken up ‘set’. “From the ‘TV’s’ in Off Kilter to the ‘Eyes’ in Wild Eye Boy. We tried to take the audience on a journey with some old school looks, to the modern big colourful looks of Good Lord and The Greatest Mistakes”, adds Adam.

ChamSys MQ500 Stadium console was spec’d for the tour. The console with an output of 64 universes, did not miss a beat. 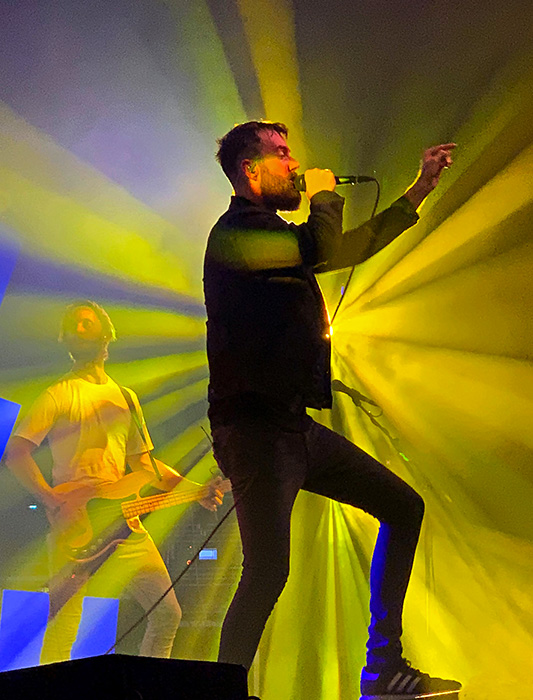 ChamSys MQ500 Stadium console was spec’d for the tour. With ArKaos MediaMaster ProV4 running the visual side. The entire rig was digital from console to the racks. The DotLine’s were merged from LED Mapper in MediaMaster and all processing was done at the console. The console with an output of 64 universes, did not miss a beat. The network to stage ran the Art-Net merge + Kling-Net from ArKaos all down 1 complete network. With the new Ethernet data racks, the data distribution was made simple, very stable and minimised setup time.

“Our new 100m core with all new 12G SDI ran the video component from FOH. We should have built one of these years ago”, stated Adam. “Previously we were running different components and the system was floored. All new cable from screen ethercon to the Art-Net cat5 was customised to suit the design. All new cable is now available to suit all other rig configurations, also colour coated to match video or art-net data. All of the lighting system was pre-cabled and ready to rock onsite!”

“We are excited to say the tour was a huge success thanks to all the team that were involved. From Seb Westgarth our Truck Driver/Support Act Lighting Operator. A special thanks goes to Adam Siggers for organising all of the back end of the system requirements pre-tour and logistics during the run. And finally to Zac Saleh for his work on the entire system side before and during the shows. There are others and you know who you are”, … Adam sums it all up.