A Stargate to Heaven

Envisaged as the catalyst for a new central business district in Lusail city, the newly built Lusail Plaza Towers have already become a landmark in Doha as well as an unmissable background for the many celebrations of happy football supporters at FIFA World Cup 2022. Designed by Foster + Partners as part of a wider masterplan for Lusail City, which includes an 80,000-seat stadium that will host the upcoming final of the 2022 World Cup, Lusail Plaza Towers are soon to become the headquarters for Qatar National Bank, Qatar Central Bank, Qatar Investment Authority, and Qatari Diar.

This group of four imposing towers – located at the end of the commercial boulevard linking the new Lusail Stadium to the corniche – consists of two 70-storey skyscrapers and two 50-storey high-rises. The taller towers reach up to the incredible height of 310m, which ranks them among the highest buildings in Doha. Symmetrically arranged around a central plaza, each of the four towers features an oval plan that twists by 90 degrees as the building rises to give the impression of an asymmetric structure of unique shape and design. At the base, a network of podium buildings surrounds each tower providing support facilities with shops, cafes, an events and exhibition centre, gyms, banks, and restaurants, making Lusail City one of the key venues for World cup fans. 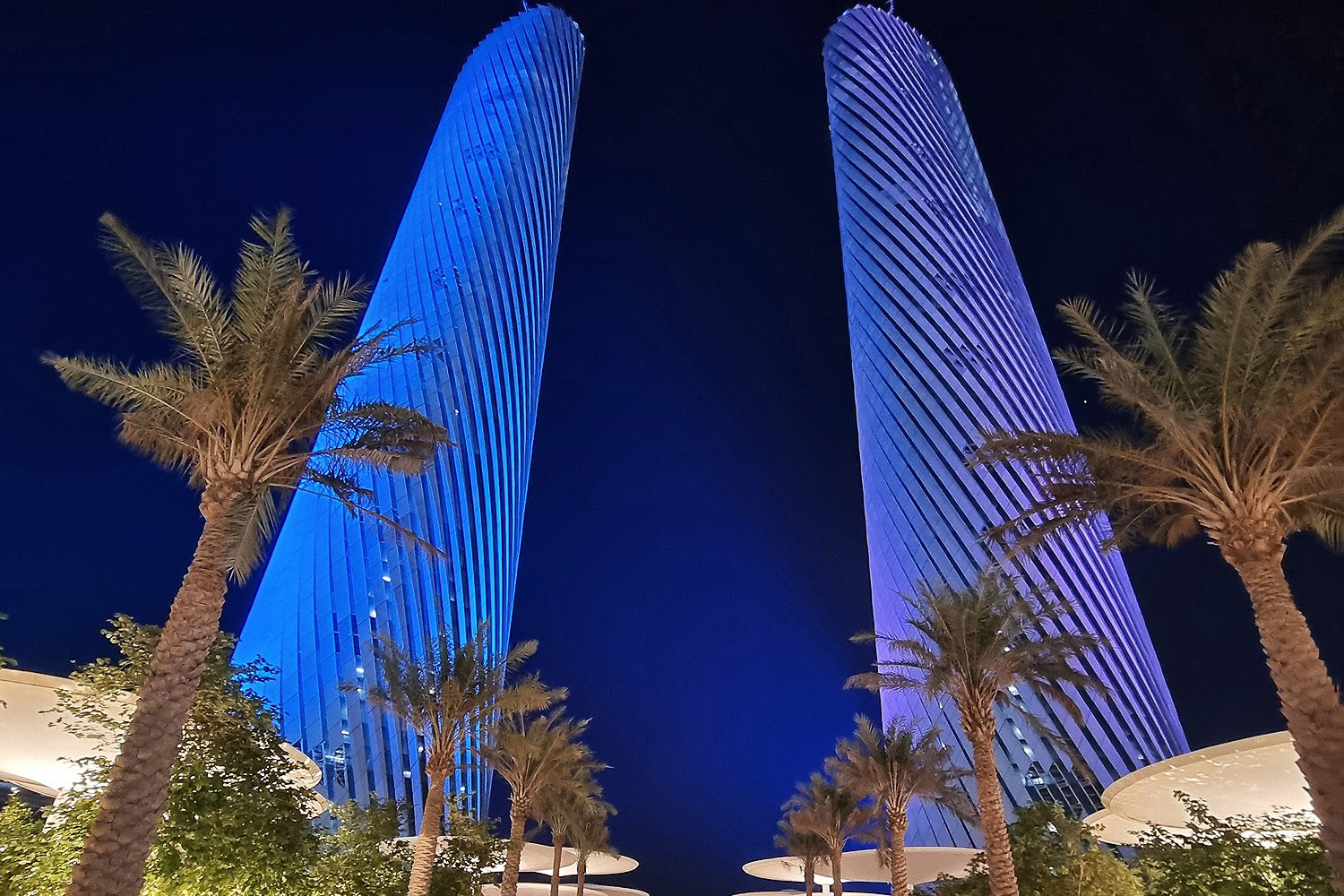 According to the ecofriendly guidelines of the buildings, efficient LED lighting and advanced automation controls were a mandatory requirement in order to reduce the site energy demand by 35% when compared to a baseline building.

With environmental design as a key driver in the project, the towers’ façades have been clad in marine-grade aluminium in response to climate and location and covered with projecting profiles to shade the glazing from the harsh sun, while preserving view out and daylight. The sustainable managing systems of the towers allow maximum reduction of the general energy consumption and water wastage, targeting the highest level in the regional Global Sustainability Assessment System. According to the ecofriendly guidelines of the buildings, efficient LED lighting and advanced automation controls were a mandatory requirement in order to reduce the site energy demand by 35% when compared to a baseline building.

Involving the contribution of different lighting designers working on the project for about three years, the developed lighting concept of Lusail Plaza Towers required the use of powerful LED fixtures which could be able to deliver a high illumination level up to the top of the four skyscrapers. According to the project prerequisites, our engineers have developed a custom version of GRIVEN CAPITAL 200 that could win the bid assuring the required luminous flux, uniform light distribution, and low consumption rates.

976 custom GRIVEN CAPITAL 800 MC made up of 4 units of GRIVEN CAPITAL 200 MC each, linked together by a specifically manufactured metal support, were installed on top of the podium buildings in order to allow a perfect illumination of the four imposing towers. These double bank fixtures are fitted with multichip LEDs using quad-colour LEDs for superior colour mixing directly at the lens enhancing seamless light distribution and smooth colour transitioning. Fitted with independent pixels clusters of 4 multichip LEDs each, these floodlights also allow the creation of dynamic visual patterns for a truly impressive lighting show. 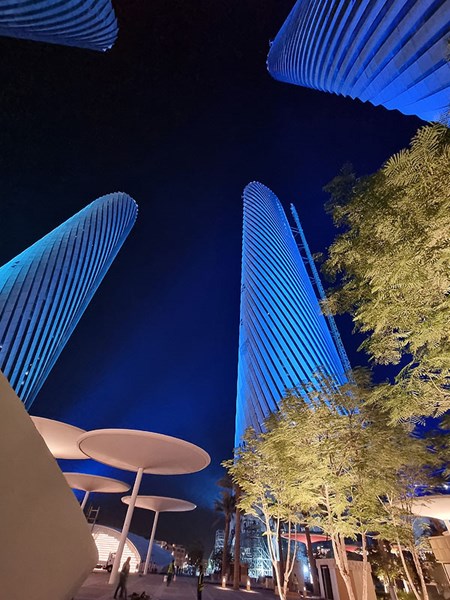 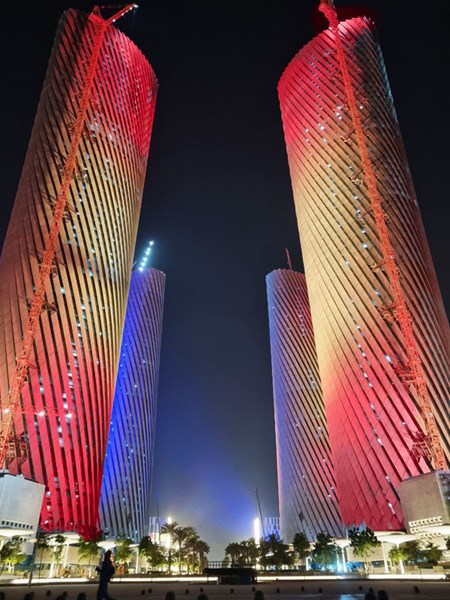 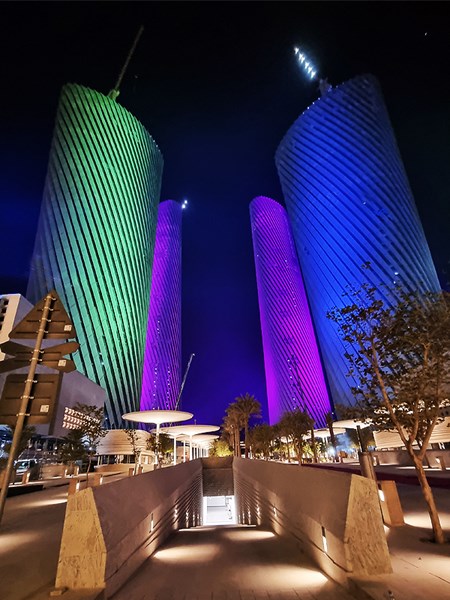 All of the LED fixtures were delivered in RGBW colour configuration with a spot beam angle of 7°. Divided in 4 plots, the Capital 800 units have been aligned in diagonal rows, according to a specific scheme in order to assure even white light and colour distribution on the four towers. Besides a different spacing between each CAPITAL 800 MC unit, a 25° tilting position was calculated as optimal inclination for the fixtures. 328 units have been used to light up each of the two taller towers, while 160 units were dedicated to each of the lower towers. With a power consumption of 636W and a luminous flux of 24184 lm per unit, the CAPITAL 800 MC floodlights feature a total consumption of 620,74 Kw/h.

Stored in a specific control room provided with air conditioning system where temperature and humidity levels are kept under constant supervision, the general control system management of the lighting equipment is entrusted to a digital control gear with professional cloud software that allows the remote control, either independent or synchronized, of the four towers lighting. A complete cabin rack, containing data server, ethernet interfaces, as well as DMX nods has been also been provided to allow smooth professional operation. Testing, commissioning and programming of the whole system were carried out by Griven’s engineers in order to assure the utmost system reliability and optimal performance. Lusail Plaza Towers can now be considered the key venue of Lusail City, an unmissable attraction for tourists and visitors, and its gorgeous illumination contributes to strengthen its reputation all over the world.

Resolution X Highlights a Great Cause with Acme Lighting